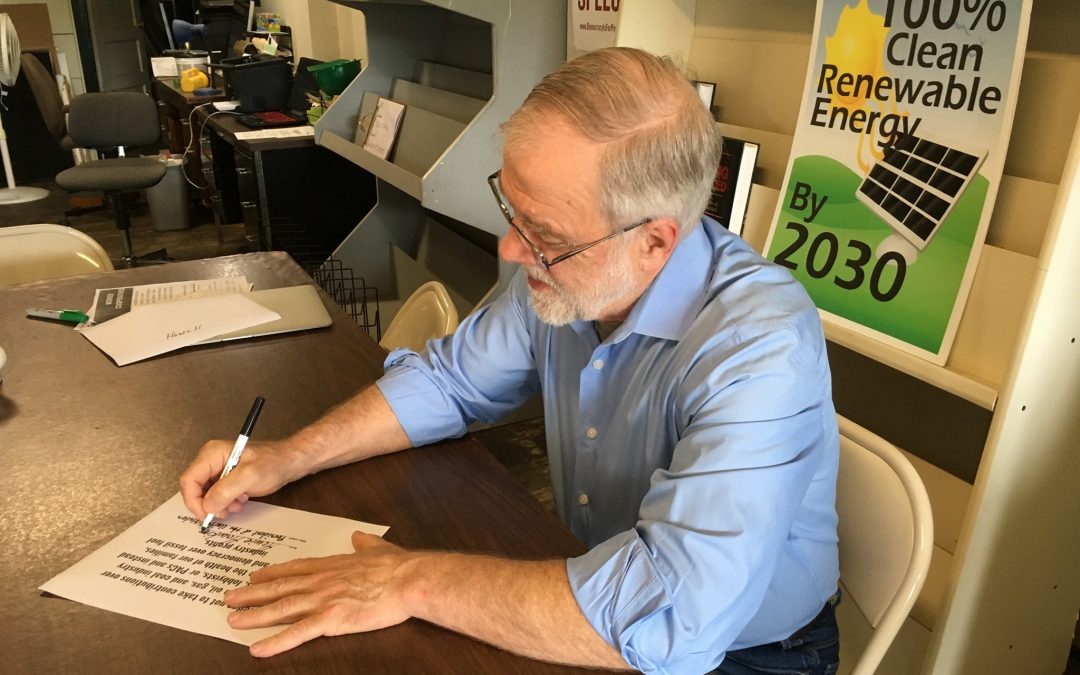 The pledge reads: “I pledge to not take contributions from the oil, gas, and coal industry and instead prioritize the health of our families, climate, and democracy over fossil fuel industry profits.”

The Sunrise Movement explains: “Taking the pledge means that a candidate’s campaign will adopt a policy to not knowingly accept any contributions over $200 from the PACs, executives, or front groups of fossil fuel companies — companies whose primary business is the extraction, processing, distribution, or sale of oil, gas, or coal. We will provide a list of these companies upon request.”

Our campaign doesn’t take any corporate money but I’m glad to add my name to the Sunrise Movement’s effort to fight the fossil fuel industry’s influence.

I appreciate Sunrise Movement’s continued push for a Green New Deal. I hope they up the ante as they continue to pressure Democrats in congress and Democrats running for president.

The movement for a Green New Deal needs to face the fact that some Democrats took the Green Party’s signature program of the last decade and diluted it almost beyond recognition. The role of a movement is to demand what we need, not compromise to what the Democrats might find acceptable. Politicians compromise. Movements must demand what’s right.

1. It fails to support the immediate frontline demand of the grassroots climate movement—a nationwide ban on fracking and new fossil fuel infrastructure. If we don’t win that demand, we will be locked into four more decades more of fracked gas and oil burning, which means a climate holocaust.

2. The Greens demand a 100% reduction in greenhouse gas emissions and 100% clean renewable energy by 2030. The AOC/Markey resolution extends that deadline to 2050. That is 20 years too late for climate safety according to the climate science.

3. The AOC/Markey resolution fails to call for a public takeover of the fossil fuel industry. Exxon, Chevron, and the Koch Brothers are not going to reinvest their fossil fuel earnings into renewables. The Greens have called for democratic public ownership of oil and gas companies, power and gas utilities, railroads, banking, and other key industries in order to make a rapid transition to 100% decarbonization and clean energy by 2030.

4. The Green Party’s Green New Deal calls for deep military spending cuts on the order of 50% to 75% with the peace dividend invested in the transition to clean energy and the realization of economic human rights to jobs, income, housing, health care, education, and retirement. The AOC/Markey resolution says nothing about demilitarization.

Yet, weak as it is, the AOC/Markey non-binding resolution has already been defeated by Democrats in Congress. Speaker Pelosi won’t bring to the floor for a vote in the House. Leader McConnell did bring it to the floor in the Senate, but the Democrats voted “present” or, as four them did, opposed.

It is also worth recalling that the Democratic National Committee unanimously accepted the Sunrise Movement’s demand to not take fossil fuel PAC money at their June 2018 meeting, only to reverse that decision by a 30-2 margin two months later at their August 2018 meeting.

The August decision also recommitted the Democrats to the Obama-era “all-of-the-above” energy policy, which is a euphemism for fracking the hell out of American for oil and gas and for subsidizing nuclear power. Fracking catapulted the US to the world’s number one producer of oil and gas, which Obama still proudly touts as one of his big accomplishments.

Removing the all-of-the-above policy from the Democratic platform was the one victory the climate movement won in the platform committee at the Democratic convention in 2016. They lost on every other proposal they made: a carbon tax, a fracking ban, a fossil fuel extraction ban on public lands, an IMF/World Bank funding ban for fossil fuel projects, an eminent domain ban for fossil fuel infrastructure, and a federal agencies mandate to weigh the climate impact of their decisions. Now the one concession the climate movement won from the fossil-fueled Democrats has been reversed.

The fossil fuel industry doesn’t need Trump’s climate denial when they get the same result from the Democrats’ climate do-nothing.

That’s why we need Green candidates up and down the ticket in 2020 campaigning for the comprehensive ecosocialist Green New Deal.