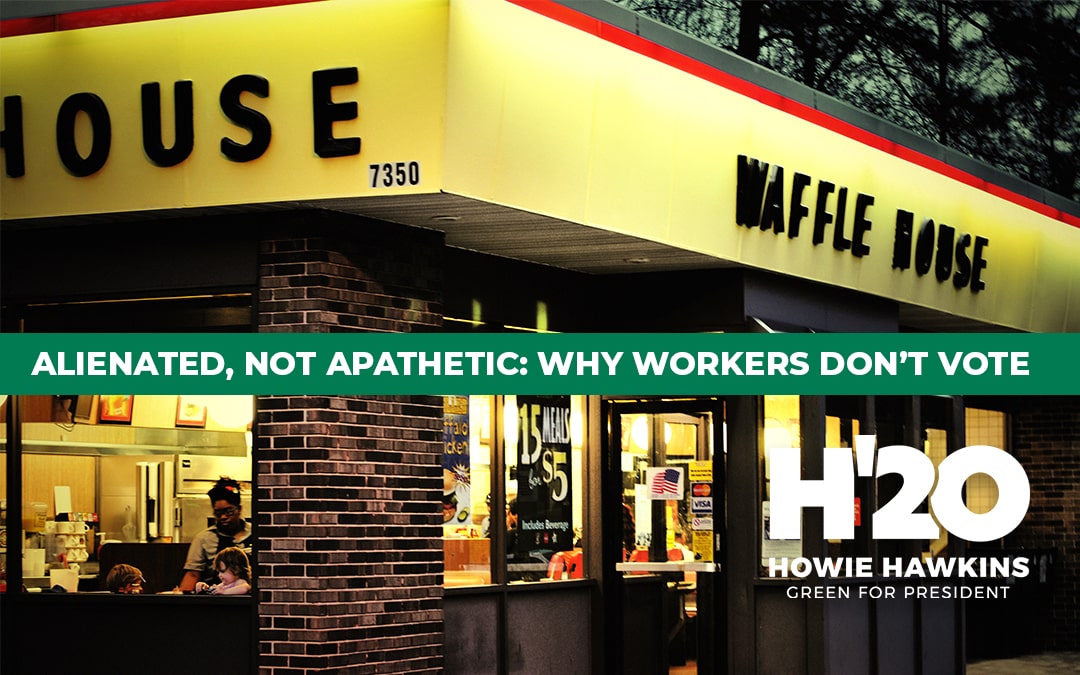 One stop that sticks out from my first campaign barnstorm through the South and Midwest was a 2 am stop on June 5 at a Waffle House in Kimball, TN, west of Chattanooga on the way to Nashville. We were on the longest leg of the trip. We had to get from an evening speaking event in Athens, GA to a 4 pm event the next day in St. Louis, MO. So we stopped at a Waffle House for food, about the only place open at that hour along Interstate 24.

Andrea Mérida, my campaign manager traveling with me, started chatting with the server, Larae, and introduced me as a “presidential candidate.” Larae was not impressed. She said she had never registered and voted. “They’re all the same to me. Nothing changes.”

But Andrea gave her my palm card anyway. The first thing Larae noticed was our demand for a $20 minimum wage. Larae told us she was making a tipped wage of $2.50 an hour plus tips, which is actually higher than Tennessee’s tipped minimum wage of $2.13. She works the 11 pm to 7 am shift when there are not a lot of customers and tips. We we were the only customers in the Waffle House that night.

Larae had recently moved to northern Alabama, from where she commutes to her job in southeast Tennessee. She moved because she couldn’t afford the rent for herself and her two children in her home town of Lochbuie, CO. It turned out that Matt, the short order cook in the Waffle House, had coincidently also moved from Limon, CO for the same reason: the rent was too damned high. Andrea, who lives in Denver, later told me these Colorado rent refugees steeled her resolve to build the Green Party in Colorado even more.

Larae went on to talk about other items in the bullet-point platform on the palm card. She talked about the fight against fracking in Colorado. She expounded on why we need renewable energy and organic agriculture to stop carbon emissions and draw carbon out of the atmosphere and into living soils. Larae was obviously well-informed on the climate crisis as well as her lived reality of low wages and high rents.

Yet Larae hadn’t ever voted because she didn’t think the politicians cared about people like her. She did say she could vote for the Green platform. We got her contact information and are communicating with her, encouraging her to register to vote and linking her with the Alabama Green Party.

Larae’s attitude about voting is common in the working class. The majority of eligible working class voters do not vote or vote infrequently.

In the higher turnout presidential elections, the pattern is the same. Census data (Table 7) shows 48% eligible voters in families with income less than $75,000 did not vote in 2016. Only 28% of eligible voters in families with income over $75,000 did not vote in 2016. With 62% of the population being workers who are directed by bosses, the 55% of families making less than $75,000 is a pretty good proxy for the working class.

Why does only half of the working class vote? Why do people of color and younger voters abstain at higher rates than older white people?

A common explanation for low voter turnout among workers, people of color, and youth is apathy. “They don’t care.”

But in my experience knocking on thousands of doors over the years in election campaigns, workers, people of color, and young people don’t vote because they don’t think it is their government. They are like Larae. Common statements are:

“The politicians don’t have no idea what people like me are going through.”

“They are in it for themselves and the rich people that pay for their campaigns.”

“The system is rigged. Voting doesn’t change anything.”

“I am not going to be a sucker for their political game.”

Of course, they are getting played in the political game by not voting. That is what the major party politicians want so they can answer to their donors instead of their voters, especially working class voters whose interests are opposed to rich donors.

If the Green Party is going to become a major party, it will have to enlist voters who are among the working class, youth, and people of color who don’t vote now because they are alienated from the political process. The Green platform speaks to their needs. Now Greens have to learn how to organize in these communities and engage them as Green Party supporters and activists.

It’s a challenge that our campaign is taking up, because the working class deserves our best efforts to build a political movement that finally represents their interests.